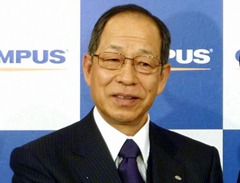 The three former executives had been identified by an investigative panel, commissioned by Olympus, as the main suspects in the fraud seeking to delay the reckoning from risky investments made in the late-1980s bubble economy. Read full article at Pettir.com

Email ThisBlogThis!Share to TwitterShare to FacebookShare to Pinterest
Labels: Accounting